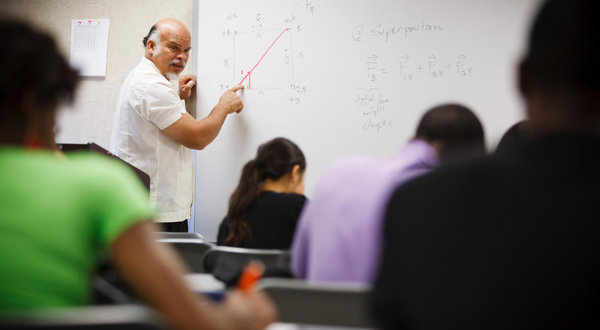 The physicist Carlos Handy moved from Georgia to Texas in 2005,excited about building a physics program at Texas Southern University. But after serving as chairman of the department for six years, he may soon have to oversee its dismantling.

State budget cuts have placed a premium on efficiency-boosting measures in higher education. This year, the Texas Higher Education Coordinating Board, the agency that approves and disapproves degree programs, implemented a more stringent annual review system for eliminating those with low enrollment. Programs that fail to graduate an average of five students per year over five years face being cut (current students would be allowed to graduate, but new enrollment would be halted). Institutions had the opportunity to request a temporary exemption, which could last two or four years, or permission to combine their underenrolled programs with more robust ones. Any appeals of the 94 requests that were denied — like Mr. Handy’s — are due Friday, with final decisions to be made at a board meeting in October.

Critics of the review system, including many professors, complain that it fails to distinguish between disciplines and, in some cases, may not produce the desired savings. The new rules, they say, could do long-lasting harm to the state. This sentiment is particularly strong among physicists, whose discipline is essential for students hoping for careers in science or engineering.