2012 Distinguished Partner of the Year Award

The Port of Houston Authority: The University and the Port 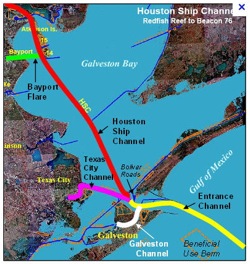 The Port of Houston Authority and Texas Southern University have embarked upon a partnership that may have significant impact upon a major infrastructure process of transportation in modern society. Transportation was the initializing influence in the growth of the city of Houston and the city became the most prominent inland sea port of Texas. To understand how this happens, a brief review of the history and geography may be helpful.

The Houston Ship Channel connects the Port of Houston to the Gulf of Mexico and the Intracoastal Waterway at Galveston. The first settlement in the area, Harrisburg (1826) was destroyed in April, 1836, by the Mexican General Antonio Lopez de Santa Anna in pursuit of Sam Houston and the Texas Army. A week later at San Jacinto, about 17 miles from downtown Houston, Santa Anna was captured and Texans were free to become the Republic of Texas.

In August 1836 New York land speculators, the brothers Augustus C. and John K. Allen, bought a site near the burned-out town of Harrisburg and began advertising a nonexistent town as the future “great interior commercial emporium of Texas.” Two months later, John Allen proposed that the first Congress of the Republic of Texas, in session at Columbia, move the government to his town, named for the first president, Sam Houston, and the Congress agreed. The maneuver was later denounced as corrupt and the government stayed only two years (1837-39) in Houston. Mud-bogged and beset by yellow fever epidemics, Houston grew slowly through 1845 and, afterward, seceded to join the Confederacy. Houston was briefly threatened in 1862, when Federal forces captured Galveston Island, which was recaptured by the Confederacy three months later. In 1863, Houston, became the headquarters for the Confederacy’s Trans-Mississippi Department, which included Texas, New Mexico, and Arizona.

Houston developed as a rail centre, with 12 railways by 1891; and, after the hurricane and flood in 1900, which destroyed 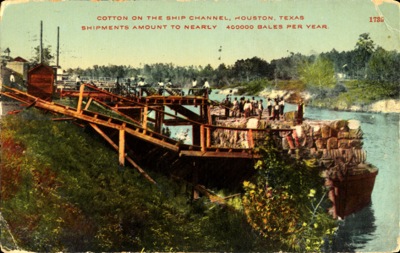 Galveston and its port; the Port of Houston became the state’s leading port. The first dock was built in 1840 and widening and deepening of Buffalo Bayou Channel was begun in 1869. A century later, the Port of Houston is the third largest in the U.S. in total tonnage moved, handling 60,000,000 tons of foreign, coastwise, and internal-canal shipping annually. A 1915 brochure advertised Houston as the city, where “17 Railroads meet the Sea.”

Oil was discovered at Spindletop, south of Beaumont in 1901, and brought considerable industrial development, triggering the city’s expansion and prosperity. Houston is the leading oil and petrochemical center; the focal point for networks of natural gas pipelines, and an aerospace research and development centre.

Immense resources of oil, natural gas, sulfur, lime, salt, and water, and the fact that the product of one chemical plant is often the raw material of another, have created,
arguably, the world’s greatest concentrations of petrochemical industries along the ship channel. During the 1960s most of the nation’s sulfur deposits, nearly one percent of its petroleum reserves, and 10 concentrated in a 19-county area surrounding Houston. Oilfield equipment, primary metals, geophysical and oceanographic instruments, electronics and other major manufacturers reside in the city with close access to the Port of Houston. In 2014, the Port of Houston will celebrate 100 years as a deep water port. The significance of the Port of Houston as an economic asset of the city is shown in the trade statistics which reveal that the Port of Houston is the number one port in the nation in terms of foreign tonnage and ranked second in total tonnage. 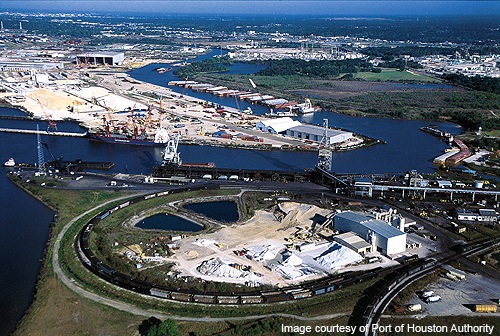 The Allen brothers, who founded Houston at a very unlikely place on a small bayou, must have understood the strategic significance of the location as the only natural
possibility for the port that would be needed for development of the region. The competition between the railroads and the waterway operators was fierce during the19th century. After the hurricane of 1900, it became clear that because the Port of Houston was a protected inland port with the major railroads terminating in Houston, the growth of the port was certain.

The continued growth of the Port of Houston is evidenced by the rapidly increasing volume of world trade, which will require many more people to operate the facilities and infrastructure, logistics, planning, deployment, and security. The Maritime Transportation Management and Security Program, sponsored by the Port of Houston Authority, is a direct enhance the workforce in an area of dynamic expansion of trade. This trend will continue for the foreseeable future and, with more advances in technology, the infrastructure will be enhanced with automation and operations not yet conceived. The Maritime Transportation Management and Security Program graduated three students in May 2012, which is a significant achievement, since the program began in 2010 and shows the interest in the program by our students.

The Maritime Transportation Management and Security Program prepares students to work in maritime transport and logistics, maritime infrastructure engineering and management, port management and operations, security of port facilities, and environmental protection. Students at the undergraduate level will be prepared to move into the workforce or pursue graduate study in associated academic fields, including the Master’s in Transportation Studies at TSU. Further, students at the graduate level will be qualified to go into managerial or advanced positions or pursue doctoral studies for subsequent careers in research, teaching and other such areas.