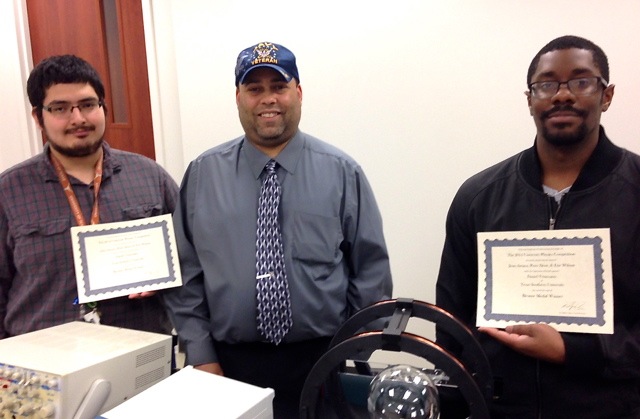 A team of three Texas Southern University students recently competed in the University Physics Competition and won a bronze medal. Mr. Juan Amaya, Mr. Peter Doze and Mr. Eric Wilson (Dec. 2014 graduate) are the Physics Majors that participated in this competition. The University Physics Competition is an international contest for undergraduate students, who work in teams of three at their home colleges and universities all over the world, and spend a weekend in November, 48 hours, analyzing a real-world scenario using the principles of physics, and writing a formal paper describing their work. The University Physics Competition takes place each year in November. All paper must be submitted via e-mail before the 48 hour time limit has elapsed. In last year’s competition 131 teams submitted papers for judging. The TSU team worked on establishing the conditions under which a planet can have a stable orbit in a binary star system, where a star has 50% of the mass of the other.

Dr. Daniel Vrinceanu, Assistant Professor in the Department of Physics served as the team’s Faculty Sponsor. According to the rules of the competition, he was not allowed to consult or contribute during the contest.