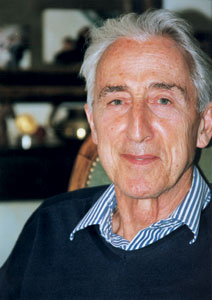 Martin C. Gutzwiller (born in Basel, Switzerland, October 12, 1925) obtained a diploma in physics with Wolfgang Pauli in 1950 from the Swiss Federal Institute of Technology in Zurich, and a PhD with Max Dresden in 1953 from Kansas State University. After that he worked in geophysics for the Shell Oil Company, then moved to IBM Research until his retirement in 1993. He was also an adjunct professor in various universities including Columbia University, ETH in Zurich, University Paris-Sud in Orsay, Polytechnic Institute in Stockholm, and finally Yale University. Dr. Gutzwiller is known for the invention of Gutzwiller wave function which is composed of a simple many-electron wave function acted on by a correlation operator (Gutzwiller projection) describing electrons with strong localized interactions (Gutzwiller approximation). He is also known for performing the first investigation of the relationship between classical and quantum mechanics in chaotic systems, as well as novel solutions to mathematical problems in field theory, wave propagation, crystal physics, and quantum and celestial mechanics. Throughout his career he has published over 60 scientific papers, and wrote classic monograph Chaos in Classical and Quantum Mechanics. He was elected to the US National Academy in 1992 and to the American Academy of Arts and Sciences in 1993; he was given the Dannie Heinemann Prize for Mathematical Physics by the American Physical Society in 1993, and the Max Planck medal by the German Physical Society in 2003. He was recently elected to the Executive Committee of the Forum for the History of Physics of the American Physical Society. In appreciation of his seminal contributions to theoretical physics, the Max Planck Institute for the Physics of Complex Systems (MPIPKS) annually awards the Martin-Gutzwiller-Fellowship to acknowledge and promote exceptional research in this field. For more information, visit http://www.mpipks-dresden.mpg.de/~mcgutz/index.html.

Dr. Gutzwiller will be giving three seminars on Quantum Chaos and related topics this week at Texas Southern Univeristy